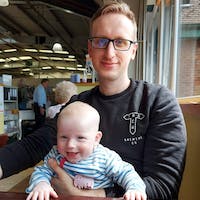 Within TypeScript a way to define an indentifier as a number is as follows:

Here productId and orderId are both numbers. However there's a few things wrong with this:

We generally want to avoid primitive obsession which means that simple values should not be modelled with primitive types such as numbers and strings. In TypeScript we can create two type aliases to create a new name to refer to the number type:

However because of the type system in TypeScript the above two types can be used interchangeably. TypeScript has a structural type system which is a way of relating types based on their members.

Here Thing1 and Thing2 are different classes but this code still compiles because they both have the same members.

If we compare this to code written in C# this would not compile as it has a nominal type system meaning the types are not the same as they have different names.

Withing TypeScript we can "brand" the type in order to replicate nominal typing. There are multiple ways of achieving this, however I'm currently using:

This creates an intersection type for ProductId, combining a number and a type with a unique symbol brand property.

We can now create a unique productId and orderId

If we were to create a function with productId and orderId parameters but mixed up the order of the passed arguments we would get a complication error.